The inauguration of the Tower Limite Limite was also the launch of a neighbourhood organisation. Construction of the tower had brought together a unique coalition of local residents, shopkeepers, entrepreneurs and schools. To perpetuate the forum for local development that had emerged from this collaboration, City Mine(d) proposed to launch a non-profit organisation, formally tying all these partners together. 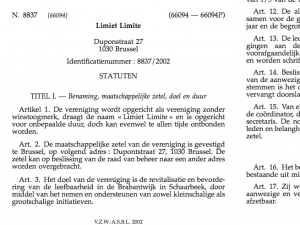 The non-profit was called Limite Limiet and its membership consisted of local residents, shopkeepers, school board members but also local and regional politicians and representatives of other interest groups.

The organisation was supported by the Flemish government in Brussels and Vlekho High School, and had a permanent staff of two. The CEO of the JP Morgan Guarantee Trust Company, who also contributed financially to the building of the Tower, took up chairmanship of the board. The organisation won large acclaim for being the first “bottom-up growth coalition”.