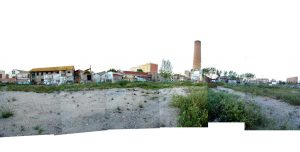 In 2002, and as part of one of Europe’s largest urban regeneration schemes, Barcelona’s district San Marti appointed Paris architect Jean Nouvel to redesign the 5 hectare derelict “Parque Central” in front of the former Can Ricart factory. When 2 years later still nothing had happened, City Mine(d) initiated a more inclusive and bottom-up alternative to the Barcelonese way of “designing the city”.