Voetstuk/Piedestal [trans: Pedestal] is a theatre play written by Bart Meuleman for theatre company Dito’Dito. The play had premiered in 1998 in De Markten in Brussels. 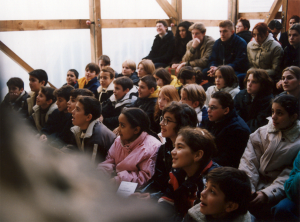 For a tour along 3 public places in Brussels in 2001, City Mine(d) invited Dito’Dito to re-make the play for street theatre. The aim was to bring theatre to neighbourhoods and audiences physically and mentally removed from the city centre’s cultural institutions. Actors Willy Thomas and Guy Dermul were decked out in bright red costumes, and the scenography by Dermul and Piet De Coster made the play accessible to even the youngest in the audience. 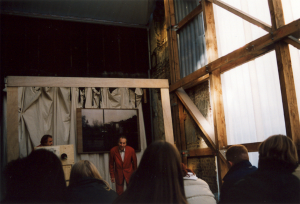 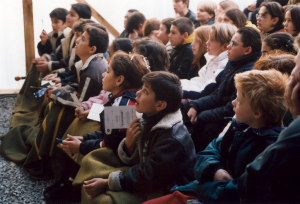 Places visited with the mini-tour were the former Ecole des Veterinaires in Kureghem, City Mine(d)’s earlier intervention Palais Van Schoor in Schaerbeek, and the Limite Limite Tower in Schaarbeek. The latter drew the biggest crowd with about 100 children from local schools attending. 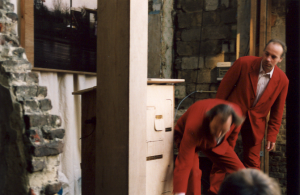 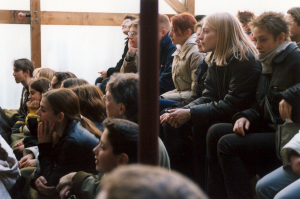