On 29 May 2004, the Commission ParcCentralPark claimed an empty area next to the Avenida Diagonal, a main road that divides the neighbourhood Poblenou in Barcelona. The Commission, initiated by City Mine(d), brought together local residents, small artisans and local enterprises, and aimed at highlighting the under-investment in public space within the 22@ development. With limited tools they cleaned the space and on 30 May officially opened ParcCentralPark.

From then on, “public cleaning meetings” were organised every Tuesday and Thursday, to keep the park clean. These meetings became the occasion to develop new initiatives like a petanque track and an urban garden, but more importantly to discuss and develop an alternative to government plans for the site and adjacent factory. 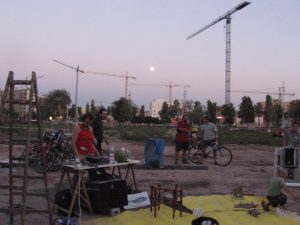 Public events like Sant Juan or the regular Friday OpenAir Cinema were used to promote and extend the Commission ParcCentralPark, which after 9 months lead to a public hearing by Barcelona’s city government.